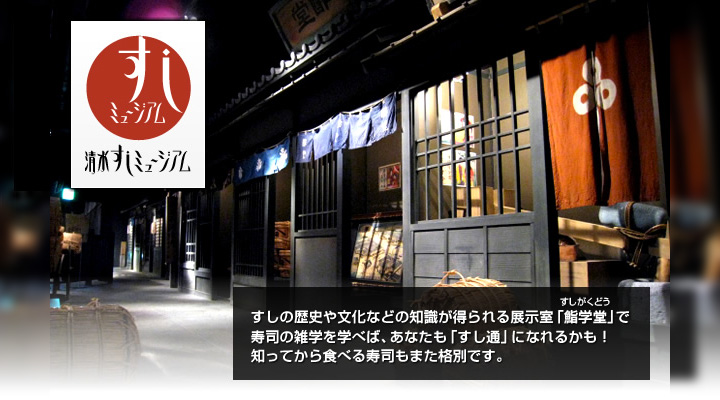 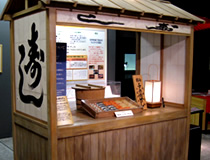 "Shimizu sushi museum" was born as the first sushi theme park in Japan. And "Shimizu Sushi Alley" of free admission, "of 2F SUSHI CLASS has been divided into and paid zone with a focus on (sushi Gakudo)".
In "Shimizu sushi yokocho" you can enjoy delicious sushi of various types.

Please present the receipt of Shimizu sushi alley to the reception staff!

Guide inside the hall

The pay zone of 2F is the information sending place of sushi. Among the nostalgic atmosphere that reproduces the Port of Shimizu neighborhood of the Meiji era, the knowledge of the history and culture of sushi obtained " SUSHI CLASS ", you can enjoy the "sushi dojo" stocked with books and videos about sushi.

Learn the history and culture of sushi

The exhibition room where you can learn the history and culture of sushi is "Sushi school". In Sushi Kanbudo, there are various exhibitions such as reproduction of the stage of Kabuki deeply involved with sushi, introduction of sushi in various parts of Japan, tools for making sushi etc. You are already at home as soon as possible.

Origin of sushi is thought to be from Northern Thailand, Yunnan Province of China from the border zone of Thailand Laos. Actually, the area around here is still an area with many types of "Teruji". And, from ancient times paddy field rice crops were a popular land, catching fish in paddy fields and surrounding waterways

Yorika Yoshino's "Fishing Bottle" appears in Joruri "Yoshitsune Senbon Sakura". This is still a real sushi restaurant, and was also presented to the Shogunate and the Chigo Gosho (Edo Period) in the Edo era. "Yoshitsune Senbon Sakura" became a place where people could know because of the popularity of kabuki and bunraku, and the name of the fishing bottle has spread further in the world.

How many kanji can you read?

The feelings of fish commonly used for sushi's story line up. I think that those of design which enumerated these kanji are often seen also in the sushi restaurant etc. Well, how many kanji can you read?

For the exhibition rooms / exhibits in this museum we are supervised by Professor Mitsutoshi Hibino "Regional Culinary Researcher". 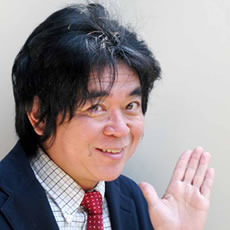 business hours​ ​※ It varies according to some stores

For inquiries to each store, details of opening hoursHere
Affordable service 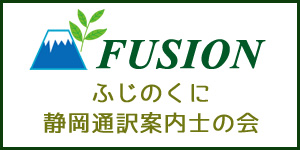